Harriet Tubman was an extraordinary woman. After escaping slavery, she travelled back to the South at least 13 times under great personal risk to rescue over fifty members of her family. She remarked to Frederick Douglass, that she “never lost a single passenger” on the so-called Underground Railroad.

There is either liberty or death, and if I cannot have one, I will have the other

Born in Maryland in 1820, Harriet ‘Minty’ Ross worked as a house servant during her early years. Before she reached her teens she stood in the path of a brutal overseer who was about to strike a fellow slave, and the overseer hit her instead. The injury nearly killed her, and throughout her life she suffered from blackouts where she fell asleep at unexpected moments, with no memory of her lapse on waking. This was to prove dangerous in her future rescue missions.

In 1844, she married John Tubman, who refused to accompany her when she decided to flee slavery, afraid the venture was too dangerous. Harriet decided to leave him, and reached Philadelphia and worked there for a short time, until she travelled back to Maryland to free her sister and her sister’s two children. 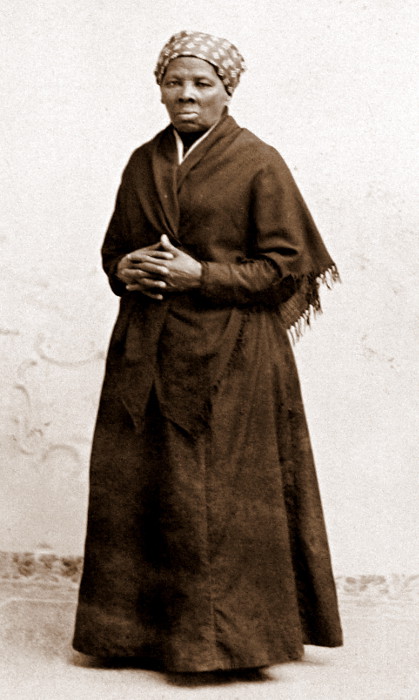 She returned to the South again to help her brother, and tried to convince her husband to come to the North, but unfortunately, he had remarried. This began her career as a “conductor” on the Underground Railroad, a network of houses and people who were friendly to the abolitionist cause, who would hide runaway slaves and aid them in their escape to the North or Canada. Tubman would rescue slaves from a plantation and head to these houses in turn.

Tubman would always leave on a Saturday night, as wanted posters for runaway slaves wouldn’t be printed until Monday, and carried sleeping drugs to sooth crying babies. She was exceptionally smart – once, when bounty hunters were on her trail, she and her rescued slaves hitched a ride on a train, riding back to the place they had escaped from as no hunter would expect them to turn back. If her charges became doubtful, she threatened them to “go forward or die.” By 1856, there was a large reward for her capture, and she was nicknamed “Moses” by fellow African Americans. During the Civil War, she worked as a nurse and a spy for the Union. She died in 1913.