As my research into Black abolitionism grows, I have collected sites of importance where women and men spoke about slavery, racial injustice, lynching, temperance and suffrage. These locations have led to the digital maps on this website, but they have also provided information for walking tours that I have created and organise on a semi-regular basis.

Check out my separate website for dates to book or use this link to book VIRTUAL walking tours during COVID-19: here

During his sensational tour of the British Isles between 1845-1847, Frederick Douglass ignited a wave of protests against the Free Church of Scotland, which had accepted donations a few years before from American enslavers. Douglass philosophised that in their acceptance of the money, the Church had acted as a bulwark for American slavery, and he used his own fugitivity to dramatize the impact on his enslaved brethren like no other abolitionist could. He travelled to numerous towns in Scotland including Aberdeen, Ayr, Glasgow, Greenock, Kilmarnock, Dundee, the Vale of Leven, and Edinburgh. In Ayr, he visited Robert Burns’ birthplace, met his sister, and in a distinct performative strategy quoted his poetry in numerous Scottish meetings, dropping it from his repertoire when he went south of the border.

The response to the campaign was unprecedented. Thousands crammed into town hall and church venues, poems and songs were composed, and the newspapers clamoured to write descriptions of Douglass’ speeches. In Arbroath, both he and Henry Clarke Wright noted that the words “THE SLAVE’S BLOOD” was painted across Free Church buildings. In Edinburgh, Douglass walked the streets to find ‘Send Back the Money’ placards spread throughout the main city, and along with Eliza and Jane Wigham, carved the slogan into Arthur’s Seat in protest. Douglass later recalled that “SEND BACK THE MONEY!” stared at us from every street corner; “SEND BACK THE MONEY!” in large capitals, adorned the broad flags of the pavement; “SEND BACK THE MONEY!” was the chorus of the popular street songs; “SEND BACK THE MONEY!” was the heading of leading editorials in the daily newspapers” (My Bondage, 383-6). While the money was never returned, Douglass admitted that it did provide the abolitionists with an opportunity to make the Scottish people aware of U.S. slavery and the nation’s connections to it.

Douglass is perhaps the most famous African American to visit Scotland but examining slave narratives in conjunction with Scottish newspapers reveal otherwise. The following maps represent a mere fraction of the number of lectures given in Scotland, and are designed as a benchmark rather than a completed project given the wealth and depth of archival research that still needs to be done into Scottish transatlantic history.

In total, I’ve collated 496 lectures by 28 African Americans over a fifty-year period (1838-1898). While activists like Frederick Douglass, William Wells Brown and William and Ellen Craft represent a significant number of this figure in cities like Edinburgh, Dundee, Glasgow, and Aberdeen, the routes of E.T. Anderson, Johe Asania, Hallie Q. Brown, Isaac P. Dickerson, Joseph Hughes, R.M. Johnson, William Johnstone, Moses Roper, Richard Sayers, Amanda Smith and D.E. Tobias remain as-yet unexplored. The villages of John O’Groats, Shapinsay, Banff, Peterhead, Carnoustie, Nairn, Alloa, Airdrie, Pitlessie, Sanquhar, and Pittenweem did not remain untouched by Black activists and survivors of slavery: the sheer astonishing scale of their lectures can only be grasped when we examine that at least two activists gave lectures as far north as the Orkney Islands, which should inspire us to look beyond the cities to fully understand their movements as they travelled along the coastline to Inverness and beyond to numerous rural communities.

The map below shows an animation of lectures happening over time from 1838-1898:

Scotland’s capital inevitably welcomed numerous African American lecturers during the nineteenth century, with the University of Edinburgh hosting several as students: R.M. Johnson, a survivor of slavery, studied medicine and gave lectures outside of term to supplement his education. Moses Roper travelled as far as Inverness in 1846; Frederick Douglass had a major impact on the city during the same year; William and Ellen Craft began their extensive lecturing tour in 1850; John Sella Martin and James Watkins gave sporadic lectures, and Josiah Henson caused a sensation in 1877, as the reported inspiration behind the character of ‘Uncle Tom’ from Harriet Beecher Stowe’s infamous novel. 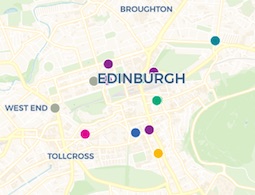 See the map below for a walking tour of the city: 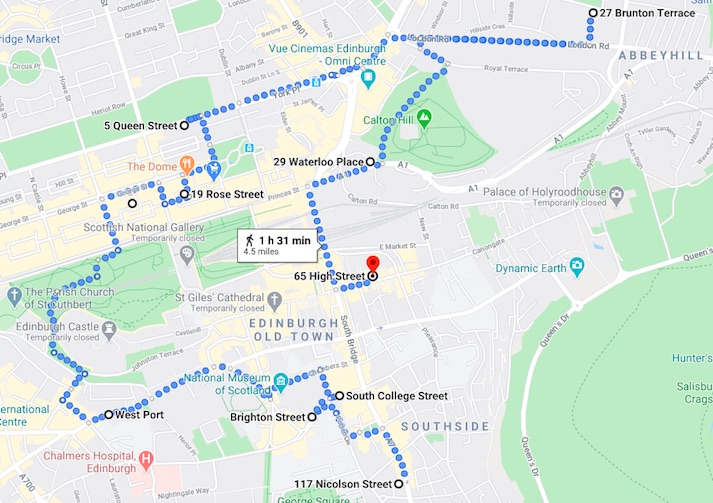 117 Nicholson Street: Nicholson Street Church was the site of William and Ellen Craft’s lecture on 30 December 1850, before they embarked on a whirlwind tour of the nation.

Brighton Street: The site of Brighton Street Chapel, which hosted Frederick Douglass on 31 July, 24 September and 21 October 1846; two lectures by William Wells Brown and William and Ellen Craft on 2 and 6 January 1851; and three lectures by Sarah Parker Remond on the 5 and 28 December 1860, and one during the second week of October in 1869.

54 George Street: Once the site of the Music Hall, it hosted at least 7 lectures by Frederick Douglass from May to June 1846. James W.C. Pennington also spoke here on 20 January 1851.

19 Rose Street: The site of Rev. Mr. Gilchrist’s church, where Frederick Douglass lectured on 28 April and 7 May 1846.

5 Queen Street: On this site, the Queen Street Hall hosted Frederick Douglass on the 30 January 1846 and William Howard Day in mid-November 1859.

29 Waterloo Place: The site of Waterloo Rooms, where Frederick Douglass spoke on the 1 May 1846 and Henry ‘Box’ Brown exhibited his panorama for the first week of September 1852.

43 and 65 High Street: In 1870, Amanda Smith spoke on the site of the John Knox House and a few yards away, Ida B. Wells lectured at the Carrubers Close Mission in 1893.

Unsurprisingly, Glasgow represents another hotspot for Black lecturers during the course of the nineteenth century. So far, I’ve mapped just under 60 lectures by 11 activists. While Douglass remains the most famous figure, other lecturers such as William Wells Brown, William and Ellen Craft, Henry Highland Garnet, Josiah Henson, John Sella Martin, Moses Roper and Ida B. Wells spoke between 1846 and 1893.

See below for a Glasgow walking tour: 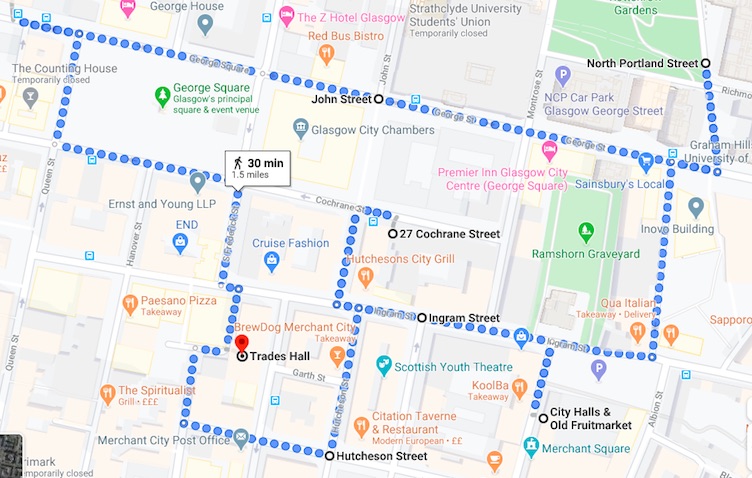 Trades Hall: Numerous activists spoke here including Moses Roper during the third week of August 1838; William Wells Brown and William and Ellen Craft on the 8, 9 15, 16, 17 November 1851, and Sarah Parker Remond on the 8 January 1861.

Hutcheson Street: This was the site of Merchant’s Hall, where William Wells Brown and William and Ellen Craft lectured on the 21 January 1851.

Ingram Street: The city’s Assembly Rooms were located here, where Frederick Douglass spoke on 1 March and twice on 23 April 1846.

North Portland Street: A Friend’s Meeting House was situated here, where Ida B. Wells spoke twice on the 2 and 22 May 1893.

Dundee remained a key destination for Black lecturers from the 1840s to the 1870s, and I’ve mapped just under 50 lectures specifically between 1846 and 1898. Once again, Frederick Douglass appears to be the first speaker here and considering the distance to other cities, many of the activists appear to have stayed here to give several lectures in a row before moving on or more likely, returning to Glasgow and Edinburgh: Douglass lectured multiple times in January and March 1846, William Craft gave two lectures in a row in 1861, Joseph Hughes spoke several times in May and then July 1862, John Andrew and Julia Jackson both spoke together during consecutive meetings in May and June 1864, Josiah Henson spoke three times in a row in March 1877 as did Hallie Q. Brown in 1896 and D.E. Tobias in 1898. Some lecturers appear to have only given one meeting, including Moser Roper, William Wells Brown and Isaac P. Dickerson. 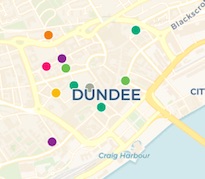 See below for a walking tour of Dundee 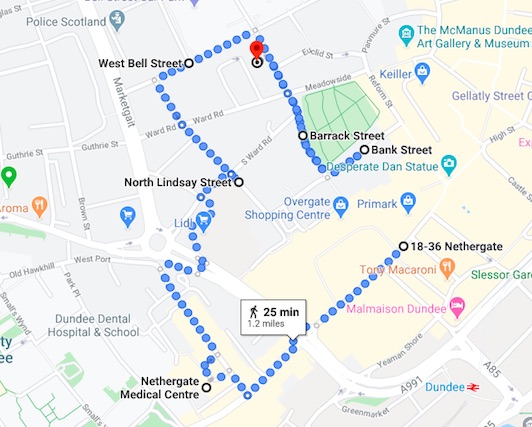 Nethergate and High Street: This was the site of Union Hall, where John Andrew Jackson and possibly his activist wife Julia lectured on the 20 June 1864.

2 Tay Square: The site of Tay Square Chapel, where Frederick Douglass spoke on the 9 February 1846.

Bank Street: Site of the Corn Exchange Hall, Frederick Douglass spoke here on the 13 February 1860, followed by John Andrew Jackson and Julia Jackson on the 16 June, and Josiah Henson on the 7 March 1877 (when it was renamed to Kinnaird Hall).

Barrack Street: Site of the Willison Free Church, where John Andrew Jackson spoke here on the 30 May 1864.

8 Constitution Road: Ward Chapel stood on this spot, and Francis Fedric lectured here on the 22 March 1861, as did Isaac P. Dickerson on the 28 September 1873.

10 Constitution Road: There was a YMCA building on this site in the late nineteenth century, and D.E. Tobias spoke here in mid-December 1898, holding two other meetings on the 11 and 15 December in the city centre.

So far, I’ve recorded just under 30 lectures in Aberdeen: while few African Americans ventured beyond Dundee, this figure is probably a mere snapshot of the real number. Frederick Douglass appears to be the first lecturer in March 1846, shortly followed by Moses Roper during his second tour of the British Isles, with William Wells Brown and William and Ellen Craft shadowing them five years later in 1851. Both Douglass and William Craft returned in the early 1860s and Francis Fedric, Joseph Hughes, Lewis Smith and E.T. Anderson lectured there between 1861-1877. There is a gap of nearly two decades before Ida B. Wells arrives in 1893, where she stayed with Isabelle Fyvie Mayo who organized subsequent lectures for her, and then the Reverend J. Hector in 1899. The following map shows the lecture distribution across the city: 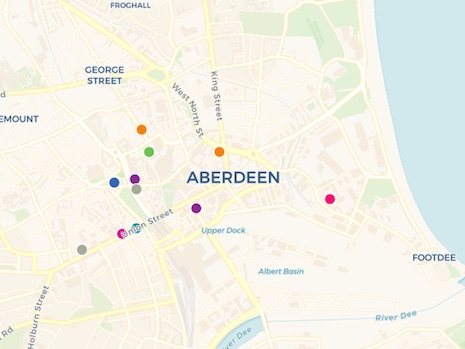 See below for a walking tour of Aberdeen 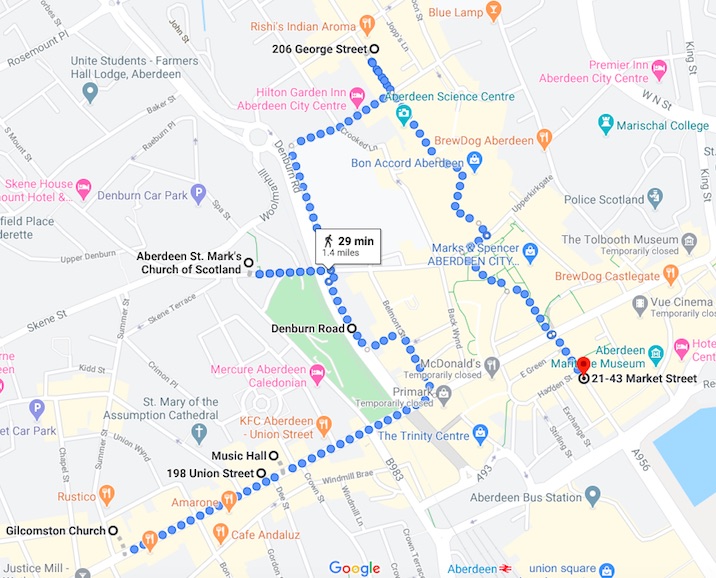 Denburn Road: Blackfriars Street Chapel occupied this site on Denburn Road, where William and Ellen Craft spoke on the 13 February 1851.

Market Street: Just opposite Hadden Street was the site of the Mechanics’ Hall. William Wells Brown and William and Ellen Craft lectured here 3 times on the 10, 11 and 12 February 1851, and on the 20 April 1864, John Andrew Jackson spoke out against the Confederacy, possibly alongside his activist wife Julia.

Alasdair Pettinger, Frederick Douglass in Scotland (2018), and his excellent website