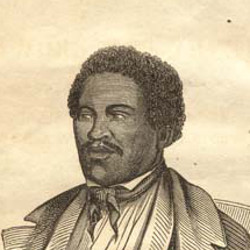 Henry Brown organised perhaps the most unusual and famous escape from American slavery, and as a result, became a celebrity on both the British and American stage.

Henry “Box” Brown, the celebrated American fugitive slave, begs most respectfully to inform the nobility, gentry and inhabitants of Exeter, and surrounding neighbourhood, that he will exhibit his original grand panorama of American slavery.

Henry “Box” Brown (c.1815-1889?) was born enslaved in Virginia. After watching his wife and three children be sold to a plantation in North Carolina, he resolved to escape. With the help of a friend, he crammed himself into a box and mailed himself to Philadelphia, a trip that lasted 27 hours. Brown’s Narrative described how the box was turned upside down for several hours, and he thought he would pass out from the crushing weight on his head. Thankfully, abolitionists were waiting in Philadelphia to release him.

Brown discovered his story lent very well to the entertainment stage, and often recreated this experience for the abolitionist circuit: for example, he boxed himself up again in Bradford and was taken to the train station, and released to much aplomb in Leeds. Brown also created a panorama of slavery, and he became a commercial success in Britain throughout the 1850s. To maintain audience interest, he tried his hand at mesmerism and spiritualism, and even became a magician, performing both in Britain and when he returned to the United States.

There are occasionally romances in real life, that, had we not the most incontestable evidence of their authenticity, we should set down as the lucubrations of a novelist, beyond the creed of truth and probability…we can but draw general attention to a gentleman who, in his career as slave and freeman has exhibited talents and displayed heroism of no ordinary character; and with the same cordiality with which we greet all worthy aspirants for fame, no doubt Mr. Brown will receive the success and honour that his merit and perseverance demand.