A national campaign against slavery was already underway before Douglass arrived in Scotland. In 1843, an independent sect broke away from the established Church of Scotland to form the Free Church, led by Doctor Thomas Chalmers.

Disruption and creation of the Free Church, 1843 (Wikipedia)

To raise money for their new organisation, missionaries were sent to the United States, and slaveholders proved particularly interested in the cause. Their donations of £3,000 angered abolitionists and they denounced the Free Church for supporting slavery. When Douglass arrived, his oratorical skill set this campaign alight:

Scotland is a blaze of anti-slavery agitation – the Free Church and Slavery are the all-engrossing topics…The Free Church is in a terrible stew. Its leaders thought to get the slaveholders’ money and bring it home, and escape censure. They had no idea that they would be followed and exposed. Its members are leaving it, like rats escaping from a sinking ship. There is a strong determination to have the slave money sent back, and the Union broken up. In this feeling all religious denominations participate. Let slavery be hemmed in on every side by the moral and religious sentiments of mankind, and its death is certain.

Douglass spoke at four meetings in Dundee in January 1846, and the first three were so crowded that tickets had to be issued for his last speech. He promised Christians he was not against religion, but argued that both slavery and Christianity were incompatible. He demanded that the entire world hear his cry against slavery, and the Free Church should be shamed into returning the money [Frederick Douglass, “Free Church of Scotland and American Slavery”, Dundee, Scotland, 30 January 1846.] 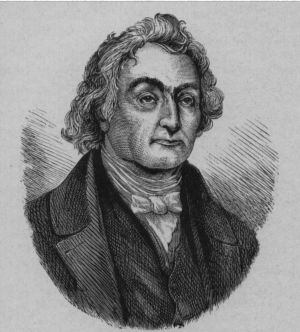 Thomas Chalmers, one of the leaders of the Free Church (Wikipedia)

In August, Douglass summarised the conduct of the Free Church:

When the slaves of America heard of a free church, we had reason to believe that the day of our redemption drew near…they accepted the slave-holders’ invitation, took their money; paralysed their own Christian feelings, turned a deaf ear to the groan of the slave as they went on their way through the South – were dumb on the question of slavery – were invited by the slave-owners to their pulpits – dined at their tables, in their pews –heard them preach to their slave congregations – took the blood money, which was offered them, and brought it to Scotland, to pay the Free Church ministers. I charge them with having gone into a land of man-stealers – among men whom they knew to be man-stealers – they struck for the sake of money…tell them to send back to America that blood stained money!

Douglass was not the only abolitionist to speak against the Free Church. Henry C. Wright and George Thompson lectured in Edinburgh in the spring of 1846, encouraging support for the campaign. When the Free Church responded that only a “small portion [of the church] comes in contact with the system of slavery”, Wright strongly rebuked them:

“Oh, that three thousand pounds! That accursed gold! That admission fee to the Free Church! That reward of treachery to God and humanity! For three thousand pounds the Free Church leaders sold their saviour to the man-stealers! Betrayed him into the hands of his deadly enemies! May they repent their sin, humble themselves before insulted heaven, and the deeply injured slave, annul their compact with thieves and SEND BACK THAT MONEY!” (Henry C. Wright, The Free Church of Scotland and American Slavery, Speeches from Music Hall in Edinburgh, Scotland, May and June 1846.)

The Stamp of Slavery Is On Them All

The controversy over slavery and religion was nothing new for Douglass, but in Britain, this controversy had international consequences. Should Britain remain friends with American churches that included slaveholders in their congregations? If British churches excommunicated slaveholders, argued abolitionists, the Americans would be shamed into ending slavery.

The leaders of the Free Church defended themselves against this by analyzing the difference between a ‘slave-holder’ and a ‘slave-haver’. If a man inherited slaves, he was technically a slave-holder, but this did not mean he was a cruel master. If he did hold slaves and mistreat them, he was a ‘slave-haver’. Henry C. Wright argued against this, stating that a slaveholder still has the power to free his slaves, he could not hide behind complexities of language or even the law. Despite this, the Free Church claimed that attacking the church was “a bad cause, prosecuted by bad men, in a bad spirit, and for a bad end.”[ Blackett, R.J.M., Building an Anti-Slavery Wall – Black Americans in the Atlantic Abolitionist Movement 1830-1860, (Louisiana, 1983), pp.80-97]

In April 1846, John MacNaughton, a Free Church minister, attacked Douglass and his abolitionist supporters. He argued that Douglass was stirring up this controversy simply to “create a false impression regarding one of the noblest institutions in the land”. The Free Church had also reiterated its antislavery beliefs on more than one occasion. MacNaughton was against excommunicating slaveholders, especially because this act would be insulting to those who helped the Free Church in its time of need. Facing a popular audience, he denounced the phrase “Send Back the Money” for its impractical and hypocritical implications. He stated that if the money was to be returned, then:

“We must not buy [American] cotton, nor wear it, we must not use their rice nor purchase their tobacco, [for] the stamp of slavery is on them all.” (“The Free Church and American Slavery – Slanders Against the Free Church Met and Answered in a Speech, John MacNaughton, Paisley, April 1846.)

The Free Church were able to weather the storm of the abolitionist controversy. They did not return the money to slaveholders in the South. Regardless of this, Douglass’ aim of making the Scottish people aware of American slavery and in this he was spectacularly successful.

In 1846, a number of songs were composed or adapted to link with the controversy surrounding the Free Church of Scotland:

Send back the Money! send it back!
Partake not in their sin
Who buy and sell, and trade in Men,
Accursed gains to win:
There’s not a mite in all the sum
An honest man may claim;
There’s not a mite but what can tell
Of fraud, deceit, and shame…

Then send the money back again!
And send without delay;
It may not, must not, cannot bear
The light of British day.”

From an antislavery pamphlet in Edinburgh, 1846.

In 1996, BBC Radio Scotland aired a programme called “Send Back the Money!”, featuring folk singers who recreated some of the antislavery songs that were used in the abolitionist campaign in 1846. You can listen to the programme here
(Thanks to Alasdair Pettinger for kindly allowing me to share this link to his account)